React.js is the most popular front-end JavaScript library for building Web applications.

You can refer to React.JS in many ways like React or ReactJS. And if we talk about the Fortune 500 companies, they use ReactJS.

Here, we will discuss some of the basic concepts on what ReactJS is and why you should go for React rather than other Javascript frameworks.

The first deployment of React was done on Facebook’s newsfeed in the year 2011 and then in 2012 on Instagram.

React makes it easy for developers to create web applications that can change or synchronise your data without reloading the page.

The primary purpose of React is that it can be used to handle the view layer for web and mobile apps. React also allows us to create reusable UI components.

Let’s highlight the features of React.

JSX, a Javascript syntax extension, is usually used with React to represent how the user interface should look.

JSX allows the developers to write an HTML coding structure in the same file where the Javascript code is written. Moreover, React makes the coding easier to understand and debug.

Let’s go ahead with a straightforward example of React that represents the implementation of JSX.

As you can see in the code, it’s neither a string nor HTML. Instead, it embeds HTML into JavaScript code.

All the representations of the “real” DOM are kept in the memory in React, and that is “virtual” DOM (VDOM).

React keeps a lightweight representation of the “real” DOM in the memory, and that is known as the “virtual” DOM (VDOM).

If we talk about manipulation, real DOM is much slower than VDOM. The primary reason behind it is that it gets nothing drawn on the screen when you change the code.

For example, when you make any change in the object’s state, VDOM is responsible only for that particular object, rather than updating all the objects available.

To make it simple for you, let’s understand the meaning of DOM and how it works. 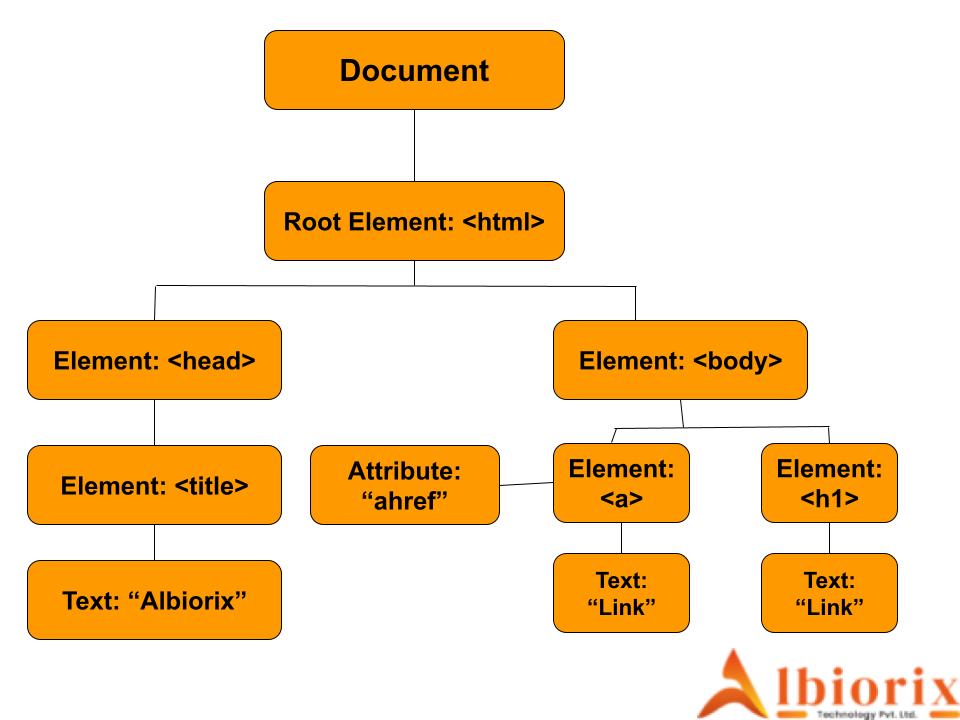 DOM treats an XML or HTML document as a tree structure in which each node is an object representing a part of the document.

The interaction of Virtual DOM and React DOM with each other is very straightforward.

As compared to other frameworks, this will lead to fast development.

As we know, React uses VDOM and makes the web applications run much faster than those developed with alternate front-end frameworks.

React breaks a complex user interface into individual components, allowing multiple users to work on each component simultaneously, speeding up the development time.

This remarkable feature of React keeps everything modular and fast.

With its unidirectional data flow, React allows the developers to nest child components within parent components during the designing phase of React app development.

A developer has complete control over the whole application, and most importantly, they are aware of where and when an error occurs.

The testing of React applications is made easy, and it’s just due to a large developer community. The excellent part of React is that Facebook provides a small browser extension that makes React debugging faster and easier, as you can see in the below figure. 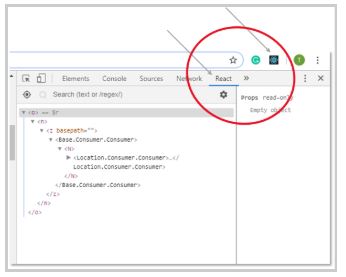 Once you add the extension, a React tab will be made available in the developer tools options in the Chrome browser. So, the developers can quickly inspect React components directly.

A component is essentially a piece of the user interface. React splits the UI into independent, reusable parts that can be processed separately.

Generally, there are two main types of components in React.

First, we’ll see the meaning of stateless components. They have no state of their own and only contain a render method.

They may derive data from other components as props (properties).

On the other hand, stateful class components can hold and manage their state and have a separate render method for returning JSX on the screen. Therefore, as they have a state, so we call it a Stateful component.

The state is a built-in React object that is used to contain data or information about the component. A component’s state can change over time; whenever it changes, the component re-renders.

The change in state can happen as a response to user action or system-generated events, and these changes determine the behavior of the component and how it will render.

Props (properties) is a React built-in object that stores a tag’s attributes and works similar to the HTML attributes.

It provides a way to pass data from one component to other components in the same way as arguments are passed in a function.

Now, it’s time to highlight some of the reasons that will clear your doubts on why React is better than other Javascript frameworks. React allows you to:

Compared to Javascript, React makes it easy for the developers to deal with less coding and offers more functionality. So, it will help you get rid of some complex coding and make the dynamic applications faster and safer.

With its active use of virtual DOM (Document Object Model), React is solely responsible for designing and building web applications faster. Yes, you read it right.

The working process of virtual DOM is relatively simple. First, the comparison of the component’s previous state is done and is updated only when the items in RealDOM are changed. So, you do not have to update all the components again, as we usually do in conventional web applications.

#3 Make Use of Reusable Components

For any React application, components are the heart of it. A single app may have multiple components. All such components typically have their logic and coding behind them.

The good part of React is that you can add as many components without worrying about the application’s performance. You can even reuse them multiple times.

When you design a new React app, you often nest child components within parent components. Right?

Often, it’s one of the best practices that you need to follow.

The data flows in a single direction in React, making it easy for the developers to debug errors and identify where a problem occurs in an application at the moment in question.

#6 Develop Both Web and Mobile Apps

React is solely responsible for developing applications for both web and mobile-based.

Facebook has released a Chrome extension that can be used to debug React applications. This makes the process of debugging React web applications faster and easier.

I hope you enjoy reading this article on ReactJS.

What are you waiting for? Build your web and mobile apps with ReactJS today and enhance the performance of your applications.